Context Menu of the Default Mode

Boolean Operation between two single shapes are included in the context menu (right-click) in the default mode (select/edit). Usage: go with the mouse over the first shape, enter the context menu and choose the Boolean operation, select the second shape.

With the Boolean tool, the operation is performed between two sets of shapes. The usage is:

A layer wide boolean operation is performed ignoring the cell hierarchy. For bis Boolean Operation the feature has a better performance to the Boolean Tools as the computations are split over all available processor cores.

Via a dialog two source layers and the resulting layer are selected. Also, the operation is chosen within this dialog. The operation A merge and A xor only requires one layer and will ignore the other one. For a complex design the design is split into frames and processed step by step. The number of frames is calculated automatic, if not set in the dialog. Press the little '+' in the lower left to see options for framing.

The Bool on Layer feature is only available in the full version of the LayoutEditor. 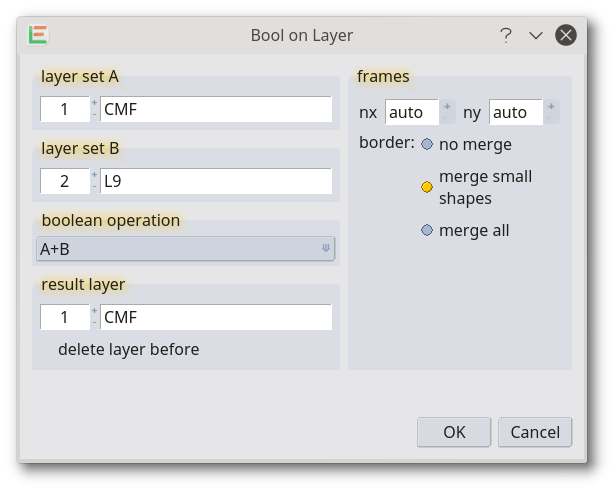